Ivanhoe Chapter DeMolay and Rainbow for Girls in Grand Forks, ND, have adopted a highway as a continuous service project at Mile Marker 145. 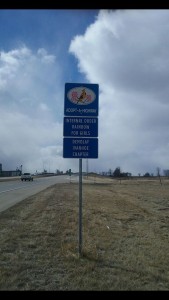 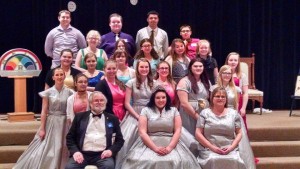 Minot Club meet with Rainbow for Girls at their Mini Grand in Fargo on Saturday, March 19, 2016.

This weekend the guys in Minot came to Fargo to help the Rainbow Girls with Mini Grand.  We got to help the El Zagal Shrine units and the Rainbow Girls with a spaghetti feed.  To end the night we played numerous games with the girls, some better than others.  But overall this weekend was great; I hope we will be able to do it again soon.  Thank you very much to Club Dad David (Doug) for putting up with us all weekend.  And a huge thank you to Ross for providing the meal for Minot and Hazen guys to celebrate DeMolay Day with us at Space Aliens.  It was a great way to celebrate the day!

Minot Chapter, having recently been reborn in November and currently a Club of the State Chapter, is off to a fast start with activities and service to others.  Since Thanksgiving, they have held five meetings, have two more prospects getting ready for initiation, and pitched in at the Lodge.  Currently leading the charge is Eric Angell, as Club Scribe and Master Councilor, a 19 year old recent high school graduate and current Master Mason.  As an advisor, it is great to have a young man like that to rely on so we don’t have to worry about keeping the guys in line.  They served the Ladies at the Table dinner during Valentine’s Day weekend, performing admirably and earning lots of gratitude and praise from Star of the West #33 Lodge in Minot.  They have plans to help with a pancake feed for a middle school girl that the Lodge is helping, taking part in a spaghetti feed at the Mini Grand for North Dakota Rainbow for Girls, helping with both Bismarck and Minot Shrine Circuses (with a possible chip in to Williston), and are already making fliers for the local schools to recruit more young men to their noble cause.  As far as fun events, they have done a successful video games night and an adventurous board games night.  They also made their first appearance at a Masonic youth dance in Grand Forks, putting on the moves, representing as true gentlemen, and enjoying a fun lock in with Grand Fork’s DeMolay Chapter.  It is a bright future for DeMolay in North Dakota and in Minot, with the Lodge in full support mode to see these young men succeed in and out of the organization, and we can’t wait to see what awaits this Club down the winding and exciting road known as life.

The Bison Bunch Club of the ND Chapter in Hazen, ND, is off to a great start!  We brought in 3 new DeMolay members along with a couple Minot Club new members on November 28 up in Minot thanks to the Winnipeg Chapter.  Prior to initiation, we had fun playing laser tag and games with pizza at Planet Pizza in Minot.  Our first official Club meeting was held on Tuesday, Feb 9th, where we assisted in a community service event at the United Methodist Church by decorating cookies for hospice care.  We held our meeting business immediately following and decided to have our Club business meetings on the 2nd Tuesdays of the month from 6:30 – 8:30 pm at the Hazen Masonic Center; and we plan to have a second meeting (tentatively 4th Tuesdays at same time and place…schedule and activities to be confirmed at our monthly business meetings) for a fun night, prospect parties, and/or ritual practices.

Just a little note to inform you all about Ivanhoe Chapter of DeMolay in Grand Forks.  We have been a little busy the past few months working closely with the International Order of Rainbow for Girls here doing our annual fund raiser together.  We started making lefse in October with our first round and finished up in December with our third round with a total of 300 pounds of potatoes cooked and sold during just over 90 dozen.  Our young men and women have a great time working this project together.  We just had an Official Visit from the Grand Worthy Advisor for Rainbow here in Grand Forks where we had a lock in dance.  They really enjoyed their time together.  We also just finished up our yearly service project where we go up to the Senior Citizens home and roll and cook lefse for them and their families and caregivers.

Let us know if there is anything you’d like to see posted or any suggestions as we do our best to maintain and update this website for the good of the order.  Please comment here by clicking on the header to this blog post, or contact one of us in the “Resources” page.